Space robotics startup GITAI will demonstrate the capabilities of their autonomous robot mounted external to the International Space Station (ISS) on the Nanoracks Bishop Airlock in 2023.

■ Ground demonstration video of In-space Servicing, Assembly, and Manufacturing executing by GITAI autonomous robot for the extra-vehicular tech-demo outside of the ISS planned in 2023 (recorded in the [email protected] Tokyo office).

■ Details of the GITAI ISS Technology Demonstration outside ISS
GITAI first demonstrated their robotic technology on board the International Space Station (ISS) in 2021 in collaboration with Nanoracks, meeting all mission objectives. As the next challenge, GITAI’s extra-vehicular autonomous robot will be deployed externally on the Bishop Airlock in 2023. 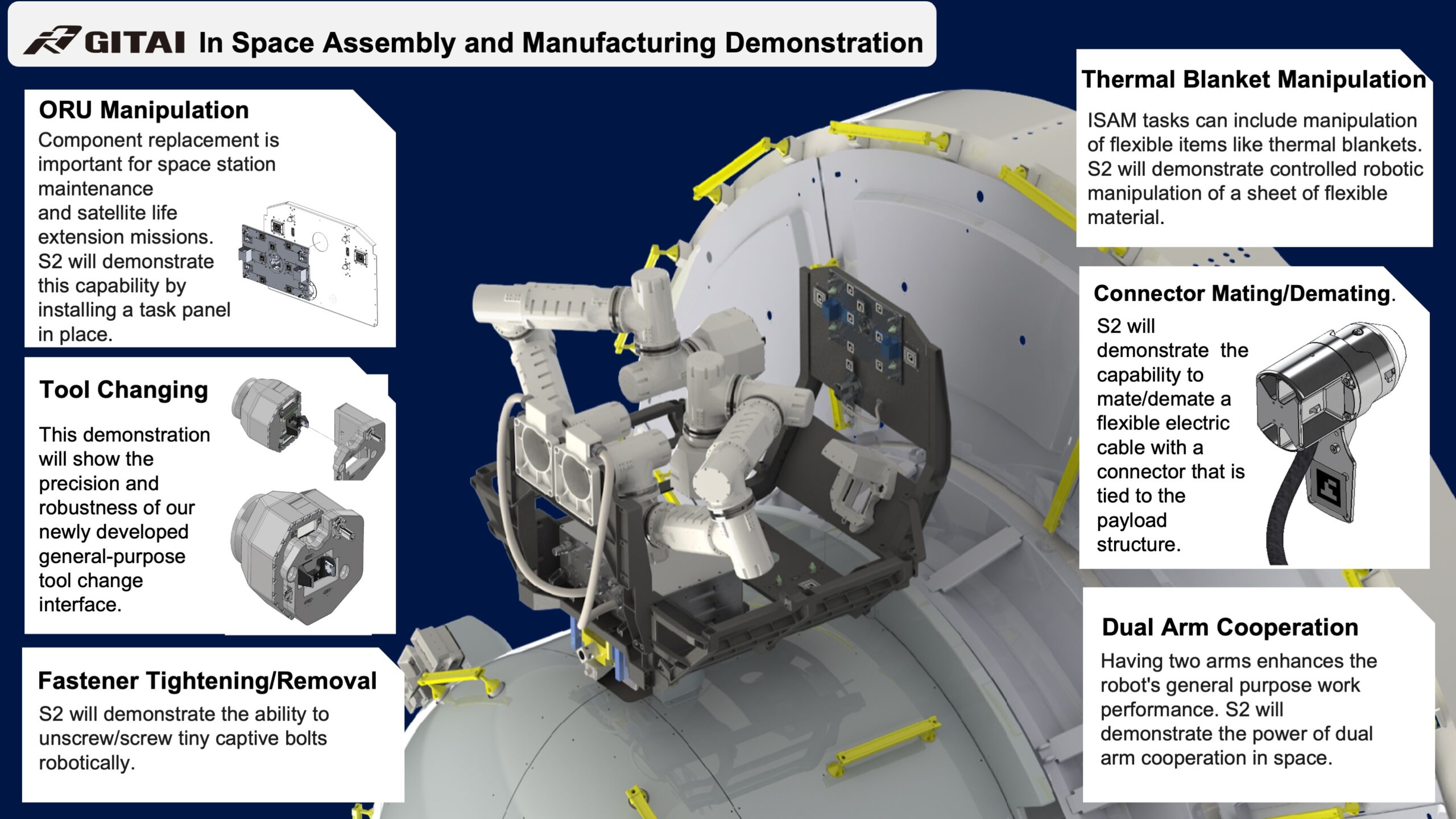 GITAI has already successfully tested this same model autonomous robot in the Japanese Aerospace Exploration Agency’s (JAXA) 8m class thermal vacuum chamber in February this year. The autonomous robot then reached NASA’s Technology Readiness Level (TRL) 6 following this ground system test.  By demonstrating this technology in space, GITAI aims to achieve TRL Level 7 (confirmation of the feasibility of the technology as a system in space).

GITAI will establish the In-space Servicing, Assembly, and Manufacturing capabilities cultivated through this technology demonstration and with the goal to provide it to the US private space stations and orbital services providers.

■ Joint announcement from GITAI and Nanoracks
“There are a tremendous number of applications in space that our robotic arm can be used for, including on-orbit servicing and lunar exploration, and we are thrilled to be able to partner with Nanoracks yet again,” said Sho Nakanose, founder and CEO of GITAI. “Our vision is to provide a safe and affordable means of labor in space, and this opportunity on the Bishop Airlock brings us one step closer to making that happen.”

“This mission is a key stepping-stone towards commercialization of LEO enabling both government and private sectors to obtain robust and high-performance robotics in space,” said Amela Wilson, CEO of Nanoracks. “We look forward to completing a successful demonstration of GITAI’s space robotics technology.”

■ About GITAI’s business activities
GITAI continues to develop space robotics actively, applying the space robotic technologies obtained through the successful technical demonstration in the ISS last year, as well as the extra-vehicular technical demonstration outside of the ISS planned in 2023.  Based on the space-proven technology acquired by the demonstrations in space,  we have been contracting various customer missions, such as joint development with TOYOTA Automobile and orders from the Ministry of Economy, Trade and Industry of Japan. We opened a new office in Los Angeles, CA, for GITAI USA, Inc., and started full-scale recruitment in the United States. We are also actively collaborating with US government institutes and private companies in the US.

■ GITAI’s Mission
GITAI is a space robotics startup that aims to provide a safe and affordable means of labor in space and reduce operational costs in space by 100 times.  GITAI aims to provide highly capable, safe, and reliable robots to help build and maintain satellites, lunar bases and even cities on Mars. GITAI is bringing together the best talents in the world to make this dream a reality.
GITAI is actively seeking highly motivated engineers and business development professionals to support these many endeavors. If you think you have what it takes, come join us to send robots to the final frontier.

■ About GITAI
GITAI is a relatively small but rapidly growing company.  Over half of our full-time employees have PhDs in engineering and science and three are former research associates from the University of Tokyo and former NASA employees. Our company executives successfully built and sold their companies including Google and American Express.
GITAI has many exciting projects at various levels of development and testing, from early concepts to laboratory prototypes to our technical demonstration robot currently deployed in a commercial module of the International Space Station;

– Establishing Permanent Human Presence on the Moon and Mars:
Including inspection on the Moon and Mars, we will conduct construction work on the Lunar Surface Station in support of NASA’s In-Situ Resource Utilization (ISRU) program. We are developing specialized rovers based on our GITAI’s prototype Rover. GITAI’s ultimate goal is to enable high capability, reliable, low-cost operations on the lunar surface.

■ About Voyager Space
Voyager Space is a space technology company dedicated to building a better future for humanity in space and on Earth. With nearly 20 years of spaceflight heritage and over 1500 successful missions as of April 2022, Voyager delivers space station infrastructure and services and technology solutions to commercial users, civil and national security government agencies, academic and research institutions, and more, with the goal to accelerate a sustainable space economy.

GITAI develops robots that can conduct tasks in all realms of space development, and cut down costs for operations by the Moon and Mars and construct space colonies.